We’re only dancing on this earth for a short while

Pixie’s secret shame caught on camera – the cat, Sid, regards her as his one true love

The blogger and her muse in happier, healthier times (this spring) 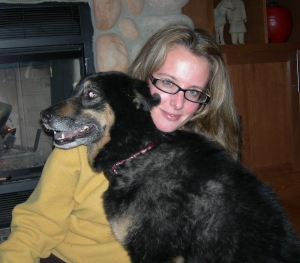 The blogger and her muse in happier, healthier times (this spring)

Okay, maybe I’m not a full-throttle atheist like my dad, but I’m definitely not a believer in anything traditional. Likely “spiritual with a very weird belief system involving parallel universes, past lives, quantum physics, shamanism, doing unto others, spirit guides, and maybe a dash of Buddhism” is the best description, and it’s safe to say that traditional prayer is not something I partake in regularly. Nonetheless, like any good hypocrite, in the throes of tragedy, such as I’m in now, I find myself groveling back to God and invoking the sacred words of my Catholic childhood. Hail Mary, full of grace…
My beloved German Shepherd mix, Pixie, is in the vet emergency hospital on dog life support, bleeding internally. Because I live in a stupid town large enough to have a single emergency vet, but too small for them to have access to an ultrasound, nothing is known about WHY she’s bleeding internally. She’s eight and a half years old and otherwise in perfect health. However, this morning she wouldn’t get up, just laid there panting. And when the doorbell (her mortal enemy) was rung, she didn’t respond. Also, according to the emergency vet, after a dog turns six “all bets are off”. They’re in geriatric pet country, and anything goes.

Anyway, with what she knows, the vet feels there are two possibilities:

1. Pixie has a heretofore undetected cancerous tumor on her spleen that has ruptured, and the blood is coming from there. In that case, they could do surgery to remove the spleen, but that would only buy her another month of life. That’s clearly selfish and cruel, so I won’t do it to her. In other words, if I learn tomorrow that this is the fate of my beloved girl, I have to put her down.

2. The long shot and the great white hope: Pixie has an autoimmune disease that is causing this bleeding. In this case, they would likely do several blood transfusions and then put her on a lifelong course of steroids, wherein she would live a normal life. I never thought I’d wish an autoimmune disease on my dog, but considering my options, all the Hail Marys are for this to come true.

The really weird thing is that i had a nightmare on Friday night about my dogs (the other one is an Alaskan Malamute who’s two and a half): I came home to my house and it had a chain link fence. The fence gate was open and the yard was empty, and I knew something bad had happened to my dogs. Someone said, “She’s dead, isn’t she?” and I started panicking and calling “come here, Sweet Girl. C’mon Pixie.” But I didn’t know where to start looking or where she might be. I worked myself into such a panic that I woke up.

I guess that doesn’t actually matter in the big picture, however. For now, I can do nothing except try not to think about it, and try not to fret and bawl and get terrified and start dwelling on how much that dog means to me and how much we’ve been through together and how I feel like my heart has been ripped out of my chest and thrown into a volcano. Thus, in the spirit of honoring the most wonderful dog – and maybe even “person” – I’ve ever known, I’ve decided to post a few pictures and maybe even a little video of her.

If you’re feeling particularly generous and regardless of your religious persuasion or lack thereof, perhaps you might say a little prayer on our behalf…

The strange, sick feeling of throwing it all away July 9, 2008

Not familiar with it? Then you’re obviously a lot more stable than I am.

Today, I am in the midst of more or less tossing my job. Actually, to be honest, it’s a bit more than a job. I’ve worked in the industry for eight and a half years, got an MBA along the way, and I am something of an uber-expert.  It’s probably more accurate to say I’m nuking my career.

On the other side, I don’t really enjoy this (or give a crap), and although I’m good at it, the thought of doing this work into the grave makes me hope the grave comes sooner rather than later. On the other hand, I feel a little like crying as I read my boss’ (handwritten) response to my trip announcement. Not because it’s harsh or out of line, but because it’s kind of cowardly and pathetic and impersonal. It appeared as #6 on a note of “to do” items for the day.

“I can’t afford to have you out for such a long period considering the volume of work I know we will have to complete. I am certain I would never give you a single assignment if you were traveling, nor would I expect you to work under those conditions – it would be very difficult to work, etc.”

I would classify that as a ‘wimpy no’. Wishy-washy, not really to the point “I don’t think so.” Typical, I guess.  What it’s also doing is slamming me up against the glass of my “struggle to have faith in the universe.” I want to be one of those people that has faith, that jumps off and builds their wings on the way down. That knows it’s all going to work out and moves fearlessly in that direction. At times, I even act like that’s the case…but it’s really just a front. In fact, sometimes I have made bold moves just to make a move, which in all honesty is its own form of cowardice. I remember a former boss (two before this one) once commented that I was “totally fearless.” I wanted to laugh. I can see where he bought into my facade, but if he’d looked a little deeper, I was actually operating 100% out of fear.

Last night I was at dinner with some customers. A coworker whose wife is expecting a baby boy in October was across the table from me. At one point, both of the women, one the mother of a boy and a girl, 14 and 17, and one the mother of two girls, 11 and 5, started to give the coworker advice on raising kids. The one said, “What you need to do, is from the second he is born is convince him that he is the greatest thing EVER and that he can do ANYTHING and nothing can touch him and no matter what, he is “IT” and it’s all going to work out in his favor.” And I plastered a smile on my face because it was hard to take that in at the same time as the realization that from the time I was born I was convinced that I didn’t matter, didn’t count, better shut up, better not be seen, shouldn’t have been born, wasn’t wanted, was probably going to be hit or smacked or pinched or slapped in the next hour, and nothing would ever work out in my favor, so don’t even try. The subsequent 30 years have been a slow march of baking those beliefs and then – more recently – trying to recognize and eradicate them.

I had the first syllable of what I thought would be a funny comment in my throat, but decided not to say it, as it was probably self-serving and a downer no one needed. What I considered saying to the guy was, “And don’t worry if you completely fail in that goal and totally screw up, because he STILL might turn out semi-normal and successful…if you consider me semi-normal and successful.”

Anyway, the point of that digression is just that I’m having a full force case of the “not raised to believe in myself” blues, and the realization that I’m sacrificing security and a paycheck and insurance and a company car for my gut instincts and a “dream” is scaring the crap out of me. I just have to keep reminding myself that I chose to take this trip because my gut told me it was something I *had* to do. It felt right. I believe I have a deeper calling and inside me is a strong desire to break free of the life I’ve built and become more than I ever thought possible. It’s just REALLY FUCKING SCARY now that it’s real.