We’re only dancing on this earth for a short while 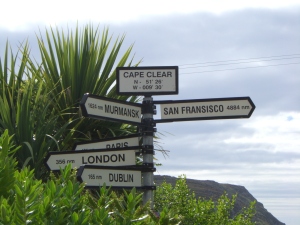 That title is both accurate (if you keep reading), and may just earn this lowly little blog a day of big hits! By sleazebags. But sleazebags who read!

Watching a little BBC Four and writing yet another blog post. Note the slight sunburn! In Ireland! That's practically like seeing a leprechaun, right???

Anyway, in order to be properly hungry for my full Irish breakfast, I woke up early and went for a long (5 ½ mile?) run today. Schull really is a gorgeous place, and you can run on the rural roads with a full view of the ocean the whole time. Anyway, I got back and took a shower and started drying my hair…and that’s when my time in Glasgow came back to haunt me.

One of the few indulgences I brought on this trip is a travel hairdryer. I had a delusional fantasy of drying my hair straight and having it stay that way. Not so much. Within five minutes of a nice blow dry, my naturally curly hair senses it’s in its mother country and starts to go crazy. Anyway, I’ve used it before without calamity, but within about 18.3 seconds of flipping it on, the fire alarms start going off, I realize it is putting out kind of an odor, and I go into a total panic.

I then notice the smoke detector on the ceiling of my room and flash back to the listing of innocent activities that can trigger a five-alarm event at the University of Glasgow (hair dryers being one of them). I’m certain that I’ve caused this with my super powered ionic ceramic whatevermajig American blow dryer. Worse, I have caused a ruckus, and I am totally nude. So I’m trying to determine the correct course of action, quickly:

I went with option one, and as I was straining to reach the alarm on the super high ceiling, I realize that the window of my room opens to the back deck. And people are eating breakfast there. I also realize that I don’t know which button to push. It’s like diffusing a bomb: One false move and the alarms might never go off.

So I’m there straining toward the thing, but still a good three inches from actually touching it, and it goes silent. I managed to crawl back down without (as far as I could tell) anyone noticing my peep show. Moreover, as I went around and apologized to all the breakfasters for causing the alarm, the proprietor comes in and informs me that it was caused by a smoke detector on the second floor! I had nothing to do with it! Her husband flipped the breaker to silence it. (Thank god I didn’t manage to reach and press one of the buttons!)

So starts another day…

After that, I pounded down a full Irish breakfast (nearly identical to the full Scottish breakfast. But with tomatoes. And the black pudding was better here), and then went and caught the ferry to Cape Clear Island. Super quick history lesson: Former post of the notorious O’Driscoll clan (unpopular Irish pirates in the 17th century), three miles long, 110 residents, has an abalone farm that provides Japanese restaurants in London and Paris, and the official language is Gaelic. It takes about 45 minutes to reach by ferry and two and a half hours to become completely and totally boring. Trust me, I tried. I walked the thing end to end. And it is one steep mother.

I did take some gorgeous pictures, but after a while, you become accustomed to the heather fields the bucolic cattle, and the sweeping panoramas. Then you go down by the dock and hang out and wait with everyone else for the 45 minute ride back. At that point, you realize that it’s not warm, but it is pretty sunny..and you’re only wearing SPF 15. Thus, I managed to obtain the rare Irish sunburn. I have come full circle!

I am only in Ireland another 36 hours…which in a way is a good thing. i have got to get away from the land of all you can drink black tea, milk, and sugar. i am a maniac with the stuff. I’m putting it down like I’m trying to win a contest. As someone who pretty much never drinks caffeine, this cannot be good for me. my cheeks are flushed, my mind is racing, and i can’t stop pouring. If it’s not enough that the kind owner of the B&B has brought me a giant pot at both breakfast and again in the early evening, I have a kettle and no less than six or seven additional tea bags in my room. I may not sleep until next Tuesday.

On the other hand, if there were a tea drinking contest, where do I sign up? I could use the prize money (there’s prize money, right? Not just more tea?) I would be a worthy contestant, and probably the dark horse. Odds might be against the Yank, but I’m pretty sure I’d stun them all.

I remember the last time i made this trip, I met some guys in London and followed them home to Liverpool. Like a stray dog. Anyway, while there, I overheard my host’s mother on the phone, telling one of her friends that they’d ‘found a little American girl, and you would not believe how much tea she drinks!” I am a one-woman Boston tea party.

Remember that ridiculous song that Austin Powers sings in the second movie? The lyrics were like, “Missus, bring me tea. Make love to me.” and then at the end he lists off “BBC One, BBC Two, BBC Three…” That’s pretty much my Friday night here in Schull. Only without the making love, and with FIVE whole BBCs and an additional channel in Gaelic to choose from. It could be a lot worse (and it probably will be some night in the near future!)…